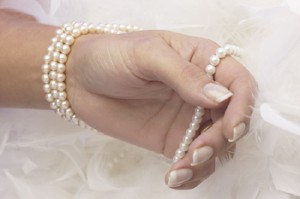 Somewhere in time, a hand is cradling within its palm, dozens of priceless, living pearls.  The hand lifts and the pearls are cast into a wilderness area containing nothing but sand, scorpions, cactus and dogs digging for bones.

The wind blows and buries the pearls in the hot sandy desert.  The pearls can’t help but wonder why the hand cast them into the wilderness.  The sand is harsh and painful.  Making the most of a bad situation, the pearls await their deliverance.

A scorpion scurries past the pearls, followed by snakes, spiders and other disgusting creatures that frighten and confuse the little pearls.  How could the loving hand that kept them in the velvet bag have tossed them to this desolate land?  They feel dirty, and beaten. Not sure of their identity anymore because they no longer live in the velvet purse, they wonder if they too are really scorpions, or even nothing more than the sand that is as far as the eye can see.

A dog walks by, sniffing for bones buried in the sand. The pearls are excited and hopeful that the dog will carry them out of this place. Putting on their best shine they glow brightly, hoping to attract the attention of the animal.  The dog trots over and sniffs wildly hoping to discover his reward. Turning up his nose he snorts on the poor little treasures not caring a bit for their useless shine.  He is hunting treasure that is bigger than life, and the pearls don’t have the desired scent, so he turns his back on them.  Suddenly the dog begins to dig furiously in the sand. Dirt flies on top of the pearls burying them further in the sand adding insult to injury as the dog pursues his buried treasure, the much longed for bone.

Now, this is what the observer sees while pondering this scene; A dog digging for bones, miles of sand and a desert crawling with snakes, scorpions and spiders. Not one pearl can be seen because of the wind and creatures that have passed by and covered the precious stones with their presence.

Do the pearls still have an identity in this dry land?  If the observer only sees dirt, have the pearls become nothing more than additional dirt?  If the dirt has no value has the dirt and the desert made the pearls any less valuable?  Any less a precious pearl?

Isn’t it interesting that when we as trusting children of God become dirtied by the carelessness of others with their opinions and their own pursuits of treasure, that we somehow identify ourselves with the dirt around us?  Since when did someone else’s opinion change who we are?  Since when did the actions of another change my value?  Since when did the desert I find myself in, make me any less than what I am?

What is a pearl, anyway?  It is a Living Stone, created out of adversity, abrasion and pain.  A stone that made the best out of irritating and painful circumstances, allowing grace to smooth the scratches and cover the wound with a protective coating of priceless worth.  There is nothing on the earth like a pearl.  No stone or rock can compare, or have the price, or claim above all, to be a Living Stone.

Now imagine the hand scooping the pearls up allowing the dirt to fall away.  What does the hand contain?  Pearls of priceless value! Greater and stronger because of the desert than when they first arrived, covered in grace and mercy! Priceless!

As you come to him, the living Stone– rejected by men but chosen by God and precious to him– you also, like living stones, are being built into a spiritual house to be a holy priesthood, offering spiritual sacrifices acceptable to God through Jesus Christ.

For in Scripture it says: “See, I lay a stone in Zion, a chosen and precious cornerstone, and the one who trusts in him will never be put to shame.”  (NIV)