Skip to content
Sarah's Tent > Balance > When in Doubt … DON’T LOOK DOWN! 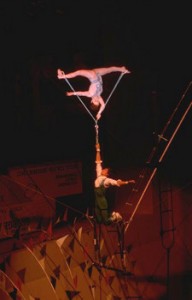 Have you ever sat on your living room couch watching another old adventure movie where the hero or heroine is telling their counterpart in the movie, “Don’t look down” as they climb a steep cliff, or sky scraper, or trapeze rope?

For that matter, have you ever been some where high up, perhaps as a child, when you yourself was told, “Don’t look down!”  Remember that dizzying feeling and the knot that gripped your stomach as fear shot through your brain?

When circus performers are trained on the tight rope, they don’t start at the top, they start at the bottom, walking on a line drawn on the floor.  Then they walk a rope that is only a few inches off the ground.  Over and over they repeat the feat until they can do it blindfolded.  As they master one level, the rope is raised and they begin again with the slightly larger challenge.

Higher and higher the rope moves until a net is finally needed.  Day after day they repeat their training and exercises,  conquering fear and familiarizing themselves with the act until they could do it in their sleep.

Finally the day of the big show comes, and they face the pressure of being watched by thousands of people.  What tremendous joy and exhilaration it must be to the performer, when after completing the final sequence of their act, the roar of the crowd meets their ears in deafening applause!  Leaping to the ground after jumping into the net, and back-flipping from the border ropes, they stand before their great cloud of witnesses and take a bow.  They’ve run the race, they’ve been faithful, they did not give up, but instead pushed through weariness, skinned knees and bruised pride to obtain the reward of their labors!

When you feel like giving up – remember how far you’ve come.  Look up! Don’t look down!  Where your treasure is, there will your heart be also! Stepping in front of my first crowd of women, who for the first time were going to ‘suffer through’ my speaking, I felt that sensation of falling after reaching too high in my ambitions.  The enemy shouted in my ears “Fake! Imposter! Who are YOU to be in front of these women?”  Then, just like one who finds himself struggling for oxygen at a high altitude I faced my fears.  Closing my eyes it was if the Holy Spirit was telling me, “Don’t look down” “Look up!”  “Keep climbing!”

I had a choice.  I could stop and back down in defeat, or cast caution to the wind, ignore the one who came from “down there” and look to the one who reigned on high…and push my way through the panic.  As a whisper I heard these tender words in my heart, “Perfect love casts out fear”.

God has intense love for all of us and He loved his daughters who sat before me.  He desired a willing vessel to pour out that love to them.  What did I have to lose? I’ve enjoyed speaking to women ever since!  Now I’ve climbed another mountain.  One I was told I could not climb because it wasn’t for ‘people like us’.  It’s a mountain of dreams and a vision so big that at times it takes my breath away. . . and I’d love for you to join me.

Imagine a network of people who are willing to lay aside interpretations and opinions to agree on absolutes.  Imagine those same people cooperating with one another and freely sharing resources, wisdom, encouragement and ideas.  Now imagine those same people actually impacting their communities, their cities and the world for good – and not just talking about it.   From experience I can tell you – its a lot more fun and incredibly interesting when you work with others and not alone.