Skip to content
Sarah's Tent > Choices > You are NOT being beat up by the Devil, nor is God withholding from you to teach you a lesson.

Are you listening? You are NOT being beaten up by the Devil, nor is God withholding from you to teach you a lesson!

However, you may be dabbling in things that might make that happen … but most often that just isn’t the case.

Now, before you get your feathers all ruffled, stop long enough to ask yourself a few questions. Questions I started asking myself after one of our congregational members came to visit me and poured out her heart regarding the challenges and woes that her life was facing.
Because her visit had interrupted me in the middle of a task, I asked her to walk with me while I finished so that I could hear her better. Perhaps it was because I was not looking at her directly, or perhaps the Lord just wanted me to hear something I’d never really paid attention to before, but while I talked, I noticed certain phrases that she was using, that I’ve heard in church often. In fact, I believe I’ve used all of them myself!
(This whole experience reminded me of the pharmaceutical drug commercials with the pretty pictures, stories, and music that plays while a sexy, comforting voice gives you the sales pitch. If you aren’t looking at the screen and getting lost in the stories, you REALLY hear what they are selling you … and the price you might pay if you act on what they are selling you. )
Sometimes we say things carelessly because they sound or feel right, and they resonate with how we are feeling at the moment. But it would be prudent for us to stop and pause to really listen to the words that come out of our mouth before speaking so carelessly.
My guess is that we’d have a much different outcome, if we were accountable to the things we believe and speak, rather than just parroting phrases we hear in church – or elsewhere, just because they are popular to say. 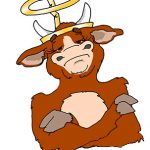 As she poured out her heart about the challenges she was facing, she began with this #1 sacred cow belief:  “The Devil is just beating me up.”

I’d first noticed this phrase coming out of another pastor’s wife’s mouth often. It felt as though every three months, we’d meet or chat on the phone, and with each conversation, she’d begin with “The Devil’s really beating me up.”
I’d not noticed how often this was said until my friend mentioned it before listing her woes.  After being asked why the Devil was beating her up if she had the authority that Christ gave her.

I have given you authority to trample on snakes and scorpions and to overcome all the power of the enemy; nothing will harm you.

She then talked about something that mattered to her. A dream that was in her heart and she truly wanted to pursue it.  I asked her, “Why don’t you pursue it then?”

Her #2 sacred cow belief presented itself, “I’m just waiting on God.”
To my question of “What are you waiting for? A certified letter?” because she could not really articulate what was holding her back from her dreams.

She replied with #3 sacred cow belief: “I just don’t want to get ahead of God!”

The “Holy Trinity of Sacred Cows that effectively prevent Christians from moving forward had just been completed. It never ceases to amaze me, how many false doctrines and dangerous beliefs are spread in the name of righteousness and fighting the good fight of faith. And these three are right at the top.

“Seriously???” I said while trying not to laugh. “Do you actually think that you can get ahead of GOD?” “I thought you were human, not greater than God!”
She suddenly stopped long enough from her dialog to come up for a breath of fresh air and started laughing. “Oh my gosh, I never thought about that.”
“That’s the problem.” I said, “I never have either until you just gave them as excuses to your life, all in a row.”
We then began to stop focusing on what was going wrong in her life, but why it was happening, and why she could stop it.

Think about this, if you were the enemy, wouldn’t you want to convince someone who had authority over you that you were beating them up because of it?

Wouldn’t you also want to convince them that they were so amazing and so holy as to be worthy of your total attention and energy? (Satan is not omnipresent – and for the record, he was put to shame and his authority was stripped from him when Christ was crucified.)

“In this way, he disarmed the spiritual rulers and authorities. He shamed them publicly by his victory over them on the cross. ” Colossians 2:15 New Living Translation

“Because of the privilege and authority God has given me, I give each of you this warning: Don’t think you are better than you really are. Be honest in your evaluation of yourselves, measuring yourselves by the faith God has given us.” Romans 12:3 New Living Translation

The belief that not doing anything is “waiting on God” is based on a scripture that is loosely thrown around, which was originally intended for people to enter into His presence and His provision. But it does not mean to “sit on your hands doing nothing until you “hear” from God. (IF you know how to hear God … you’ll already be taking action and moving forward, by faith, doing what God has already put in your heart to do.  This is not the same as what I’m referring to here, in regards to “hearing”. This type of hearing is waiting for some sort of Thunderbolt to come out of the sky and make everything clear to you – in every detail.)
On the contrary, it’s the STEPS (action) that a person takes that is DIRECTED (leaning in to hear His directions) by the Lord.

The mind of man plans his way, But the LORD directs his steps. Psalm 37:23 New American Standard Bible 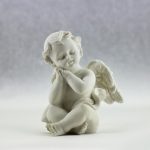 To top it all off … we actually believe we can “get ahead” of GOD? Wouldn’t we have to be better and greater than God to get ahead of HIM? After all, He is in all of time. Past, present, and future. It’s IMPOSSIBLE to “get ahead of God”.  Perhaps we mean that we don’t want to get ahead of his timing. But even then, that requires leaning into Him and listening and following His directions … to our footsteps (plans and actions) meaning … WE HAVE TO DO SOMETHING.
From what I’ve learned in life, most people are going to hear what they want to hear. It gives them the feeling that they are in power and more holy than others while remaining the victim and martyr for the sake of their beliefs.
Then they justify their results by saying that the Devil is beating them up BECAUSE they are so Holy!!! ouch!
The big missing ingredient in all of this discussion is YOU. You are the person who says or believes these things. Think about it – where is YOUR responsibility? It’s pretty convenient to blame anyone other than us, isn’t it?
Perhaps the hard times we experience in life aren’t so much the Devil beating us up, or being attacked because we are so holy and intimidating to you (excuse my laughter while writing this) … but because we are actually experiencing a harvest?

7 Be not deceived; God is not mocked: for whatsoever a man soweth, that shall he also reap.” Galatians 6:7 King James Version (KJV)

Good or bad, what we are usually experiencing in life is the result of decisions, choices, beliefs, and behaviors that we have CHOSEN. Stop long enough to think about it.

What is YOUR payoff for believing as you do? How’s that working for you?

2 thoughts on “You are NOT being beat up by the Devil, nor is God withholding from you to teach you a lesson.”