What appeared to be lost, was never lost. Not in your life, and not in mine. Nothing that God begins is ever lost… Sarah’s Tent is rebuilding.

The word of mouth spread quickly and in just six short months, over 800 women were visiting Sarah’s Tent and participating in online chats, emails and phone conversations. Not all were super active, but I heard from them often as they would tell me how much Sarah’s Tent meant to them. What surprised me the most was that there were patterns, or common symptoms, of pain that I observed from my unique birds-eye view. No matter the title, no matter the status, no matter the denomination. The faces might change, but the stories were all the same.

Never expecting to see and hear what I did, my search to find answers revealed first what the problems were. The answers came later …

At the time AOL was sending out trial CDs of their software.  This marketing campaign was what introduced me to the concept of email, and eventually to the AOL community online. What a treasure trove of answers and new discoveries!  And … what an alarming peek at “The dark side of the force” of pornography flooding my email as spam, as a sign of things to come.

Immediately, I became involved in the AOL community and my activities were spotted by AOL community leaders, one of which invited me to participate in specialized training on how to host chats and manage difficult situations in their online chat rooms.

What I experienced and saw during this time still haunts me today– almost 17 years later. The ability to communicate with others who were familiar with what it was to be a pastor’s wife, and the safety of being able to show up as “anonymous” or a creative screen name such as, “LovinDaLord*”, pastor’s wives began opening up and pouring out their hearts and encouraging one another.

In a recent blog post that I’ve read, Kay Warren says this …

I grew up in a pastor’s home and have been married to a pastor for 36 years. I have no idea what “normal” life is like. Being a pastor’s wife is one of the most challenging endeavors a woman can face. Where do you turn to find support and encouragement for the unique struggles you face? Encouragement for the Pastor’s Wife is more than a study series; it is a journey through the tears, trials, struggles, heartaches, triumphs, and joys of being a wife of a pastor. I have had the honor of walking through the joys and sorrows of being a pastor’s wife and I want to encourage you that you are not alone in the challenges you face every day. Kay Warren 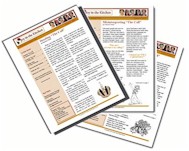 As more and more connected, I saw a need to keep things together and started a newsletter named “Joy in the Kitchen”.  The heart of which was women gathering around a communal kitchen, laughing, talking, sharing, enjoying one another in true relationship and mentoring or friendship.  Chats soon evolved, and guest speakers from various professions were invited to come and talk to these amazing women of influence and humanity.  The most common topics requested were hard core topics that addressed taboo subjects addressing a wide range of addictions. Sexual addiction, food addictions, and verbal, physical and abuse issues were a running theme, much to all of our surprise.

Perhaps one of the most healing aspects of these chats was when a woman would open up and share a serious issue that she thought was only hers to endure. Every time, others would pipe in and tell their own stories.  Stories that would have never been told in a pastor’s meeting or church event. These were gut-wrenching stories that were hidden under cover of shame and humiliation, condemnation and fear.

Fear of ‘being found out’, or of ‘ what will people think?’ or, fear of what could happen if …  There were times when the fear was so tangible that you could almost taste it and it struck me that this was not something that should be in the church, let alone behind the pulpit.

Then there were the patterns of disease and health issues.  Why were so many pastor’s wives struggling with Lupus, Diabetes, Fibromyalgia, Chronic Fatigue Syndrome and … blindness?

Why were so many pastors and their wives unable to provide for their children or themselves? There were some who seem to be doing okay, all things considered, and some even prospered well, but there were way too many who were serving their beloved congregations while sacrificing their own families in all areas.

Then there were the angry congregational members, the gossip, the attacks and accusations.  Stories so hair raising that local news media outlets would join in on the mud-slinging, glorying in the gore of human failings, while selling more advertising at the expense of the pastor and his family … and anyone else involved.

The hunger to be heard was, and still is, mind-boggling.  Sarah’s Tent was one of the first, if not the first pastor’s wives and ministry women’s community online. In short order, others arose and many still exist and thrive today.  Each one has a beautiful mission and is flavored by the denomination or faith that it represents.

I praise God that I experienced this two year season of communicating and encouraging pastor’s wives. My own life would take a down turn and our family would be crushed beyond recognition before it was over… but what the Lord showed me through this experience has stayed with me. Gossip, division, blame, death threats, divorce, bankruptcy, foreclosure, physical death, family trauma, abandonment and abuse … it just never seemed to end.

What had brought me to the point of starting Sarah’s Tent was what I had first thought was the hardest season of my life, but that was pre-school compared to what happened in my life after Sarah’s Tent was birthed.

I wouldn’t wish the experience on anyone, but I wouldn’t trade the lessons for anything. I’m a better woman, a wiser woman, and a woman with resources, insights and reinforcements.

The beauty of seeds that have dropped into fertile soil before the forest burns down, is that the soil is super-fueled with the charcoal that soaks into the soil as everything in sight is burned to the ground.  The heat of the fire, the elements that are released into that soil and the rains that come, trigger new life that would never have existed if there had never been a fire.

What appeared to be lost, was never lost. Not in your life, and not in mine. Things may have changed, but nothing that God plants is ever lost… Sarah’s Tent is rebuilding. Greater wisdom, more resources, better tools and experience.  If you’d like to join with me in rebuilding a safe place for pastor’s wives and women in ministry to access resources, share, and communicate on a very real and very blunt level, I encourage you to comment below and to subscribe to our RSS feed.  We tasted the first fruits and saw the promise … we saw the walls destroyed, and watched others suffer as those walls laid in ruin. We’ve walked around those walls and assessed the damage and have counted the cost. Now we rebuild … with resources and wisdom.

Who are the “we”? I’m not alone … others have joined me in the desire to provide a safe place for those in ministry – both women AND men.  People who have walked through hell and lived to tell about it. People who all have stories of their own fires, and their own resurrections.  People who are not faint of heart, but of strong courage and determination. We invite you to join us …

*Screen name is fictitious and not based upon any known past, present or future screen name and is purely a coincidence if one does exist.

6 thoughts on “Who Encourages the Pastor’s Wife? Enter … Sarah’s Tent and Other Pastor’s Wives”