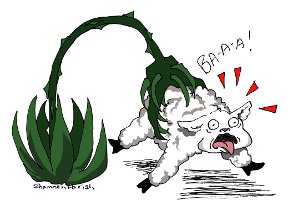 Recently a friend sent me an article about this unusual and deadly plant. Everything about this living organism shouts METAPHOR!

How well I know a wide range of individuals within churches of all denominations who patiently wait their time to feed on unsuspecting ‘sheep’ or fellow Christians.

At first appearance, they seem harmless enough, with their rich, healthy glow and sleek, green leaves. But you will find that if you get too close these individuals, they will not be who you first thought them to be.

With a variety of tools at their disposal, they attract individuals who are double-minded, confused and lack confidence in their own faith and self worth. With a few carefully chosen words, they ensnare the innocent in subtle ways; first with a few shallow, comforting words of weak encouragement, promising of more to come. Then with sharp cutting words that strike at the deepest soft spots of the individual’s underbelly. 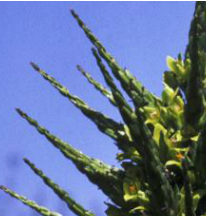 Like the razor sharp barbs of the Puya chilensis, their conversations and comments strike doubt and fear in the mind and heart of those who are unaware. With camouflaged flattery and criticisms the listener begins to feel stripped of power, helpless and without hope. Their self-worth plummets as the Sheep Eater points out their own power and glory and achievements.

Lacking confidence because of the subconscious manipulations, facial expressions of disdain or disgust, impatience or anger, the ‘sheep’ is brain-washed into helplessness and begins to starve spiritually, mentally and emotionally.

Doubting that they can truly hear God’s voice, they are hypnotized into believing the words from the Sheep Eater. Struggling with doubt and questions, they wear down and eventually give up the struggle, forsaking their dreams, their hopes, their relationships and their finances … all because of the sharp barbs that have ensnared their mind, heart and soul.

As the sheep withers and dies at the feet of the Sheep Eater, their life begins to rot and decay. Chaos, fear, drama and emotional upheavals confirm what the sheep always feared … that they weren’t good enough … even for God.

The Sheep Eater feeds off of such spiritual failures because it gives them more control and a greater feeling of superiority. They point to the dead and dying and pass judgments on them, growing in strength and size.

There are Christian “Super Stars” that are Sheep Eaters appearing to be harmless landscaping elements. Because of their size and status, all those who hear them question their own eyes and discernment. “How could so many people not see this?” They question themselves of unethical behaviors.  “Surely they must be the ones that are being judgmental. Because surely others would recognize a problem if there was one.”

And as one individual after another questions their own faith and discernment, another is ensnared and begins to struggle against inevitable starvation and eventual death. The Sheep Eater smiles knowingly …

2 thoughts on “Sheep Eating Plants On The Prowl”