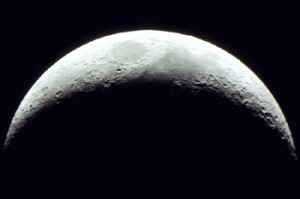 The night was chilly and crisp, the skies clear and the mountains to the west glowed an eerie silver blue-gray in the twilight. My two children, husband and I were wrapped up in blankets, standing or sitting on the deck of our home in Colorado, faces lifted toward the moon.  This was the night we were to see the much talked about Lunar Eclipse.  For what seemed an eternity, we stood in the cold fighting stiff necks to see what we might only see in a lifetime.  The moon was brilliant that night with not a cloud hindering our vision.  The light reflected by the sun was almost blinding, and looking through binoculars, we all agreed, the moon was breathtaking!

As the Earth moved between the sun and the moon, the Earth’s shadow began its cast on that brilliant silver sphere.  As time passed, the shadow completely covered the surface of the moon.  Whether it was my imagination or not, it seemed as though a breathtaking silence fell on the Earth that night as we watched the moon, stripped of it’s shining glory, hang silently in the night.

I was speechless.  Never before had I seen this orb in this manner.  When the sun’s light was shining, it seemed active and vibrant.  Now it hung as if by magic like a huge ping-pong ball in space without life.  Eventually the Earth would pass through the sun’s light and once again the moon would be illuminated.

This morning I was remembering that moment.  The impact of the lunar eclipse was immense in my soul and reminded me of how we must appear to the heavenlies when we are standing in the Son’s light, reflecting back His image to a lost and dying world. And how the heavens must fall silent with disbelief when we allow another object or relationship to come in between us and our beloved Lord, cutting off all light, leaving us hanging in space, dead and without energy.

Paul instructed us to be LIVING sacrifices. Could it be that I’ve allowed something to come between the Son’s rays of glory and myself? Could my eating habits be casting a shadow on His vibrancy in life? Is that relationship that I’ve become so pre-occupied, covered me in a shadow that has left me lifeless? Are the angels singing at His glory reflected from my face? Or have they fallen silent in disbelief as we have moved into another’s shadow?

The awesomeness of this is that the Heavens do declare His glory, and they speak to us of His wonders, revealing His mysteries and bringing hope to the lost and strength to the weary. Don’t despair my friend, if you have allowed a something to cast a dark shadow on your life, this dark season will pass as you stand firm and refuse to be drawn into the path of the illegitimate offender. Once again the Son’s glory will be reflected from you face and you too can join the angels in heaven proclaiming, “Did you see THAT?”

~ ~ ~ ~ ~ ~ ~ ~ ~
Rom 12:1-2
I beseech you therefore, brethren, by the mercies of God, that you present your bodies a living sacrifice, holy, acceptable to God, which is your reasonable service. And do not be conformed to this world, but be transformed by the renewing of your mind, that you may prove what is that good and acceptable and perfect will of God.
NKJV