Skip to content
Sarah's Tent > Life Issues > He Said, She Said, They Said – How to Judge Things Clearly

Every judge in the land has a heavy responsibility to hear out all parties in their court and then make a decision based upon evidence provided.

They are trained and skilled listeners who know the law of their jurisdiction and have vital skills in discernment and decision making.

Every police officer has the same challenge when gathering information from witnesses regarding a certain event. Many witnesses mean more stories to plow through.

You and I both know that the job of being the pastor or a leader within a church sounds noble, but it quickly becomes a nightmare when emotions flare and the ‘children’ bicker in the Church Family.

Here’s a quick illustration to help you see through the gossip, rumors, opinions, and filters of information that comes from a variety of viewpoints. We’ll say that YOUR viewpoint is the green one, at the top.  Why you? Because you have a story in your head as much as the next guy and any decision you make is going to be filtered through that story IF you are unaware of it. 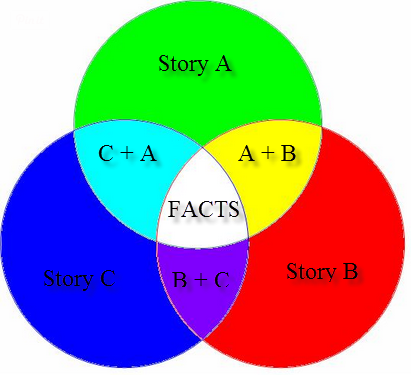 Story B (in red) is Sister So-and-So’s story and take on the situation. Story C (in blue) is the defendant, or person in question. If you are the person that is being challenged to defend yourself, then it is you – and yes, you can carry more than one story.

The light blue, yellow and purple sections of the intersecting stories are labeled as C+A, A+B, B+C, etc, because they are those elements in stories that you can “see the view point” of a story. But, that story may or may not be the truth, because it is still being filtered through yours, and the other parties viewpoints and opinions.

FACTS, in the middle is just that. The facts. There is no story, there is no opinion, there is no filter. They are facts. It is what it is. This is the shared event that is in question.

Whenever you are tempted to get caught up in an emotional story about an event LOOK FOR THE FACTS. If you can’t find the facts, then ask clarifying questions regarding the event. 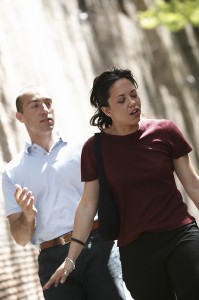 An administrative assistant in our church was accused of having an affair with her department boss. The wife was convinced that there were problems and had been planting herself in the assistants office to “keep an eye on her” during work hours, bringing her toddler with her. The actions of this woman were costing the church time and money as the assistant attempted to get her work done and still be cordial to the woman.  At the time, the assistant was completely oblivious to the accusations this woman was bringing against her and was more than confused about why her boss’s wife found it necessary to camp out in her office.

She demanded that we confront the woman and fire her immediately, but could offer up no proof that what she suspected was happening. This was a very serious accusation and we had to handle this with kid gloves, and still be in integrity.

When we met with the assistant about the accusation she was shocked, confused and heart broken. She stated quite simply, “When would I have time to have an affair with her husband? She’s camps out in my office on a daily basis!”

Her question was a good one, and an obvious one, but still didn’t clear up the matter. We had to thoroughly investigate the situation by assessing all of the facts. Our correct conclusion was that the assistant was NOT having an affair with her boss, but that her boss was having problems in his marriage.

Years later, we learned from one of the adult children in this family, that the mother was constantly terrified that her husband was going to have an affair and leave her. The children KNEW that the assistant wasn’t having an affair with their Dad because they went to the church school and came home with him. He was in their presence constantly! They told us that their mother had a history of making false accusations and eventually, her actions destroyed their marriage.  (Her husband never had an affair on her)

The woman had built a case up in her mind to the point that she was accusing an innocent person and was attempting to get that person fired. Not once did she look at the facts, or ask clarifying questions.

Clarifying questions are not questions that can be answered with a simple yes, or no. They are the who, what, why, where, when, and how questions. They address the origins, locations and evidence of a situation. In the example above, those questions would be:

The very existence of contracts is to prevent situations from arising in business where conclusions can be drawn simply from assumptions. When a client says, “you didn’t deliver what you promised”. The first thing to assess is “what DID you promise?” Was it clear?

If you prove that you in fact, delivered what was promised, the next, clarifying question might be, “What were YOUR EXPECTATIONS of what was delivered?” Were you expecting a $100 camera, for instance as a drawing give-away because the picture on your raffle board looked like a $100 camera, or did you expect a $25 camera, which it was?”

The next clarifying question is to look at the wording that was on the raffle poster, was the text present that described the gift as a “Camera worth $100?”  If not, then you know that it was an assumption from the person’s view point, and you will be more clear in the future when giving away prizes!

People have expectations. As pastors and leaders in the church, you are set up for the highest of expectations, whether from yourself, or from others. The expectation is often a subconscious one of expected perfection and holiness. After all, you ARE the pastor aren’t you? Aren’t you supposed to know everything?

It’s silly – and in fact, not even logical, that anyone should expect any minister or clergy person to be perfect, yet that expectation is the fodder for gossip stories world wide. There is very little mercy when it comes to ‘church folk!”

The next time you have to navigate through a tough situation ..